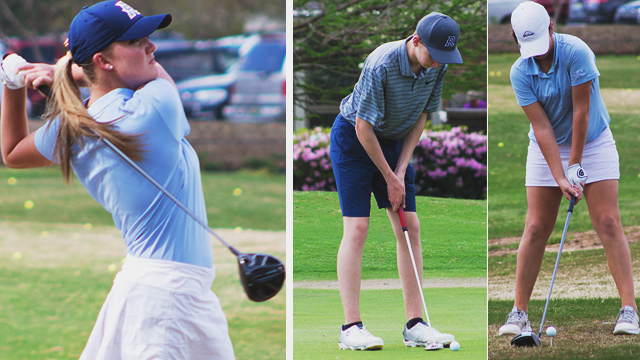 The Randolph Varsity Boys and Girls Golf Team both won matches at The Ledges on Tuesday, April 16th 2019.  The Boys Blue Team defeated the Silver Team and 2 other area high school teams to win the match.  The Randolph Blue Team shot a match total score of 163, Grissom 181, Randolph Silver Team 183,  Westminster Christian 202.  Sophomore Chris “Euro” Kobriger shot the low round for Randolph 40 followed by 3 scores of 41 by Senior Chris Wiginton, Junior Bryce Johnson and Freshman Charles Warren.  Blake Mitchell’s 46 rounded out the scoring for the Blue Team.  Sophomore Devine Devine led the Silver team with a score of 44.  Middle schoolers Drew Dodgen and Luke Lunsford shot 46, Senior Fletcher Wilson 47 and 8th grader Evan Brown shot 57.  Randolph Boys Head Golf Coach Pat Lewallen said “The boys are getting more consistent scoring as of late and I believe that is a by-product of our focus on the short game during practice.”.

The next scheduled golf match for boys teams will be Wednesday, April 17th at 8:00 am. The Randolph Team will be at Goose Pond in Scottsboro playing in the Scottsboro Invitational.

The Randolph Varsity Girls Golf Team also competed in the match against Grissom and Westminster Christian.  The Randolph Girls team defeated Grissom 124-135, the WCA Girls teams did not have enough players to officially form a team score. Junior Michaela Morard shot the low round of the match 35.  Other Girls scores were 8th Grader Elle Webber 44, Freshman Bella Duesing 45 and 8th Grader Lucy Sinclair shot 57.  Randolph Girls Head Golf Coach Michael Morard said, “our Girls are beginning to understand playing to the design of the golf course and I like how we are positioning ourselves just before State tournament play”.

The next scheduled golf match for Girls Team will be Wednesday, April 17th at 1:00 pm. The Randolph Team will be at Goose Pond in Scottsboro playing in the Scottsboro Invitational.