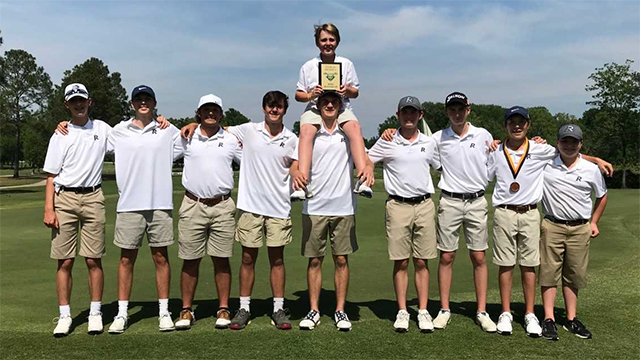 The Randolph Raider boys golf team set yet another new scoring record at today’s Section 4 Sectional Golf Tournament played at Point Mallard Golf Course. The Raiders shot a record low score of 311 capturing 2nd place. Leading the team was all-tournament selection Charles Warren with a 1-over 73, tying him for 2nd place for individual low score. When asked about his round Charles stated “I’m just ready to continue working hard and doing well at sub-state!” Senior Chris Wiginton contributed a season best 76 shooting an even par front nine. Says Chris, “I got off to a good start on the front nine. When I encountered some adversity on the back 9, I didn’t let it get the best of me. Instead I focused on bouncing back after a bad hole.” Rounding out the scores were Chris Kobriger – 79, Blake Mitchell – 83 and Bryce Johnson – 85.

Boys coach Pat Lewallen stated “Placing 7 out of 10 team members into sub-state is incredible! It speaks to the strength of our program. Seeing our younger players play well today gives us a great base in which to keep the program going strong.”

The Raiders compete next Monday in the NORTH 3 Sub-state qualifier at RTJ Silver Lakes.