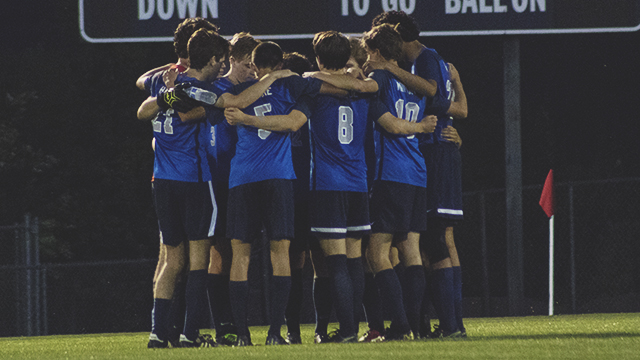 The Raiders were looking to head back to the final four, but they had to get through Fort Payne, last year’s 6A state runner-up. The game was fast and physical from the start.  The Raiders scored first when Senior Parker League played a great ball over the top to Junior Ian Krajna.  Ian dribbled across the 18 beating multiple defenders and then put a great shot past the diving keeper for the 1-0 lead.  Fort Payne leveled the game a few minutes later sending the game to halftime tied at 1.

The second half the Raiders looked good and were looking to take the lead.  This time Ian found Parker for the goal.  Ian took a clearance off his own corner kick to play it back in perfectly to Parker who headed it in.  The boys were up 2-1 but Fort Payne was not going away.   The game went back and forth.  The Raiders had a couple of good chances but couldn’t find the net to put the game away.  With 10 minutes to go in the game Fort Payne found the equalizer.  The game ended regulation time tied 2-2.  The game went to two 5-minute overtimes where no one scored.  The game was now going to be decided by penalty kicks.   The Raiders missed their first and needs Fort Payne to miss one.   Senior Keeper Max Shaw got the save we needed and gave the Raiders the chance they needed, but it was called back and Fort Payne was given another chance which they made.  The Raiders lost a heartbreaker in PKs to Fort Payne.

The team can hold their heads high and be proud of what they accomplished this year.  They were forced to play up in 6A where they proved they can compete with anyone.  This Senior class will go down as one of the best.   They have never lost an Area game and are 4 time area champions, appeared in 3 Final Fours, 3 State Finals and are 2 time State Champions.  Senior Sam Hartley is Randolph’s all-time career goal scorer with 99.  Also, Parker League will go in the Randolph and AHSAA record books with 54 career assists.  They totaled 66 wins in their time here at Randolph which is more than 15 wins per year.  Great job boys, all the seniors will be missed.