Randolph Senior Varsity Golfer (2020) Michaela Morard had an historical 2019 summer of golf that started with the 2019 AHSAA Class 4A-5A State Championships and recently ended with the USGA Women’s Amateur Championships and she still has a couple of more tournaments to play.  All she did in between those events was to play some of the best golf of her junior golf career and brought home numerous championships. 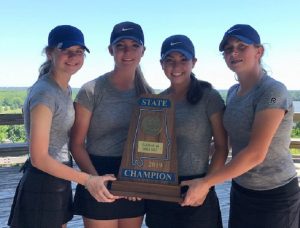 Michaela Morard led Randolph School to its 1st ever Golf Team State Championship in May of 2019 and also won the Individual State Championship by shooting the 2nd lowest total for Girls in AHSAA history. (-9, 69-66 = 135)  In 2019 Michaela joined Janie Jackson, Huntsville High, and Virginia Green, Fairhope, as the only girls to win 3 individual State Titles.  She also tied her AHSAA lowest post season average score of 67.5. (Sectionals 66, Sub-State 69, and 69 – 66 State) She also set the AHSSA All-time lowest individual season average of 69.5 and established the AHSAA All-Time Career Individual State Tournament Average of 68.4 in her 8 rounds of tournament golf in the AHSAA State Tournament. 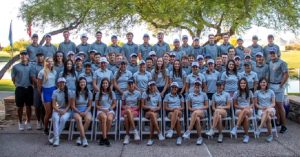 Michaela finished in the Top 15 in this Elite International Invitational Only Tournament.  The tournament is played on the Raptor Course at the Grayhawk Golf Course in Scottsdale AZ that is famous because of Phil Mickleson’s involvement and will host the 2020, 2021 and 2022 NCAA National Championships. 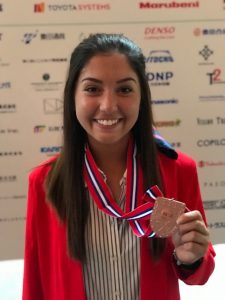 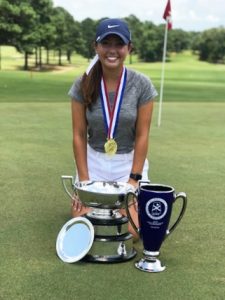 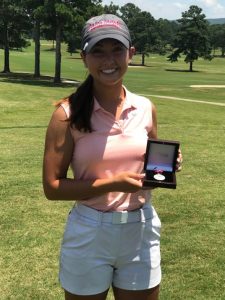 The 2019 qualifier was held the day after the State Junior Girls Championship as 20 junior Girls attempt to qualify for 2 spots. Michaela shot a flawless round of -5 67 to win low medalist for the qualifier and qualify for the USGA Junior Girls Championship in Stevens Point, WI.  In Michaela’s round of 67, she recorded 3 birdies, 1 Eagle and 14 pars to earn her ticket to Wisconsin.  This was the 3rd straight year that Michaela has qualified for this tournament. 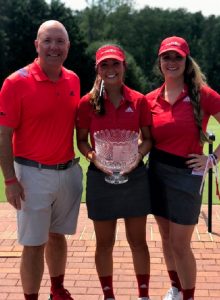 Michaela was selected to play in the 2019 AJGA Wyndham Cup based on her national ranking.  The Wyndham Cup is a Ryder Cup style Junior Tournament that selected the Top-10 boys and the Top 10- girls from East of the Mississippi River and West of the Mississippi River.  Michaela playing for the East team for the 2nd year led the East Team to a 27.5 to 22.5 victory.  Michaela’s individual record in this year’s tournament was 3-1-0 as she faced some of the West’s Teams stronger opponents. 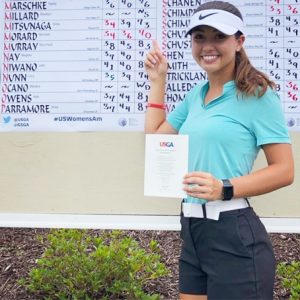 This 2019 USGA qualifier was held in Atlanta GA and had 84 participants playing for 8 spots in the 2019 USGA Women’s Amateur Championship in West Point, MS.   This particular qualifier had at least 75% of the field as Division 1 college golfers with many of the players coming from the SEC, ACC and Big 10 conferences.  Randolph’s Michaels Morard shot a -2 under par score of 70 that included 3 birdies and only 1 bogey to get 1 of the 8 qualifying spots.  This is the 2nd time in 3 years that Michaela qualified for this prestigious tournament. 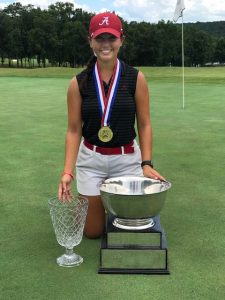 With 1 round of qualifying to determine the Match Play seeds, Michaela shot a +2 over 74 that tied for low medalists with 2 other players.  Michaela, because of her lower back nine total, was selected to be the #1 seed in this tournament.  This State Women’s Championship, being conducted for the 87th time, is the longest and most prestigious State Women’s Championship and its Champion is determined by Match Play.  Division 1 college players from Univ. of Alabama, Auburn University, Troy University, Middle Tennessee State University competed in this tournament along with some of the State’s Top Women amateurs.  Michaela won her 1st match 6 and 5 and won her 2nd match of that day 2 and 1 after basically having to shoot -5 thru 17 holes to win.  In her semi-final match Michaela won 3 and 2 and was -3 thru 16 holes.  In the Championship Match, Michaela won the title by beating Anna Claire Little, who will be playing for Troy University this fall, 2-Up by winning the 17th hole with a birdie to take a 1-Up lead and winning the 18 hole with a 2 putt par.  With this victory

Randolph’s Michaela Morard becomes the 1st female in Alabama State Golf History to win all 4 of Alabama Golf Associations Big Titles.  (2019 Women’s Amateur Championship, 2016, 2018 Women’s Stroke Play Championship, 2015 Women’s 4-Ball Championship and 2015, 2017, 2018 and 2019 Girls Junior State Championship.)  Michaela’s 8 AGA Women’s/Girls Championships over the past 5 years now ties her for the 2nd Most All-Time Women’s/Girls AGA Championships and she did all of this before the start of her senior year at Randolph. 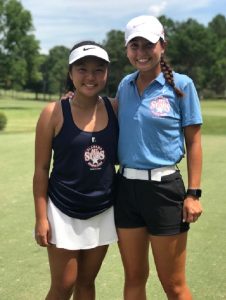 For the 1st time in AHSAA All-Star week history, golf was selected to be part of the week long AHSAA celebration in Montgomery Al.  Randolph’s Michaela Morard was selected to represent the Girls North All-Star Team.  Michaela, playing in the 1st match of the day, got to hit the 1st shot of the tournament for the girls and proceeded to defeat her Girls South Team opponent 12 points to 7 points as the North Girls All-Star Team (58.5 points) defeated the South Girls All-Star Team (55.5 points.)  Michaela was excited to represent Randolph in this tournament and many other Randolph Boys and Girls golfers are sure to follow. 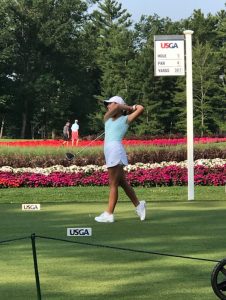 This USGA Tournament gathers 156 of the finest Junior Girls Golfers from around the world who qualified to compete in a 2-day stroke play tournament to determine the top 64 players who advance to the match play portion of the event.  Randolph’s Michaela Morard shot rounds of 73 and 75 for a 2-day total of 148 and advanced to the match play portion of this championship and was seeded in the lower half of the bracket.  Michaela, seeded 57th, had to play the 8th seed Bohyun Park of Korea in her 1st match.  Bohyun Park is ranked in the Top 10 players in the world as is Randolph’s Michaela Morard.  In a match that would be fitting of a semi final or finals, Randolph’s Michaela Morard birdied her last 5 holes played to beat Ms. Park 6 and 4 and advance to the round of 32.  Michaela was -6 under par thru the 14 holes played in that match.  With the win Michaela got the honor to play the #1 ranked Junior in the World and good friend Rose Zhang.  The following morning Rose played the match of her life and was -8 thru 11 holes as Michaela played well and was -3 thru 11 holes. Ms. Zhang eventually won the match 7 ad 6.  Michaela was quoted by saying, when your opponent shoots 8 under par thru 11 holes, all you can do it tip your cap and say “well played” 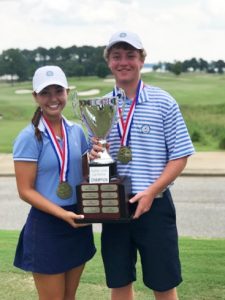 In the annual Ryder Cup style match between the states golf associations of Alabama, Arkansas, Mississippi and Missouri, Michaela was selected to play in her 4th consecutive Southern Cup matches by her winning the 2019 State Junior Girls Championship in June.   Michaela, who is a 2020 verbal commit to the University of Alabama got to play her co-ed matches with Jones Fee, a 2021 verbal commit to the University of Alabama. The Morard-Free team was 3-0 in co-ed matches and Michaela was 2-0 in her individual matches as Team Alabama led by Randolph’s Michaela Morard’s 5-0 record retained the Southern Cup for the 4th consecutive year.  Michaela’s 4 year playing record in the Southern Cup is 14-0-0. 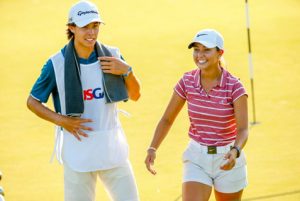 This USGA Tournament gathers the Top 156 Amateurs in the World who qualified, many of the players are Division 1 college players from the top women’s programs in the country.  Tournament format is 2 days of stroke play with the top 64 players advancing to the match play portion of the tournament.  Randolph High School Senior Michaela Morard, who happened to play her 2 stroke play rounds with the eventual Women’s Amateur Champion Gabriella Ruffles, birdied her last 4 holes to shoot -5 67 on a golf course that was playing over 6,500 yards.  Her 1st round score of 67 tied her with Andrea Lee of Stanford for the lead.  Andrea Lee is ranked #2 in the World Amateur Golf Ranking, that rank all women amateur golfers from around the world to include all college players, while Randolph’s Michaela Morard is currently ranked #142 in the world.  Michaela shot a second round +2 74 for a 2 day total of -3 141 and got her the 8th seed in the match play portion of the tournament.  Michaela’s 1st opponent in the match play was Univ. of Tennessee rising sophomore Malia Stovall.  In a very tight match that saw each player take the lead, Randolph’s Michaela Morard won the match 1-Up when she parred the very difficult 18th hole at Old Waverly in West Point MS to advance to the round of 32.  In her next match, Michaela played all right but not great as she fell to her opponent 4 and 2 and ended her summer run of golf.

Randolph is very proud of you Michaela!! #RaiseTheR