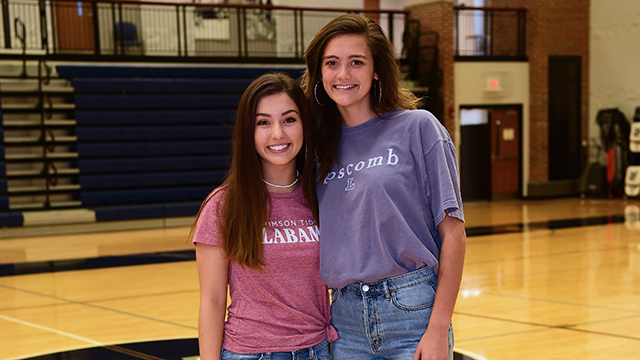 The Randolph School community celebrated the decisions of two Randolph senior student-athletes on Tuesday.  The hard work, determination and sacrifice away from the spotlight by these two seniors have led them to this day in the spotlight. They have earned the opportunity to further their education and athletic passion beyond high school and the Randolph School community is honored to celebrate with these students, their families, friends and coaches. 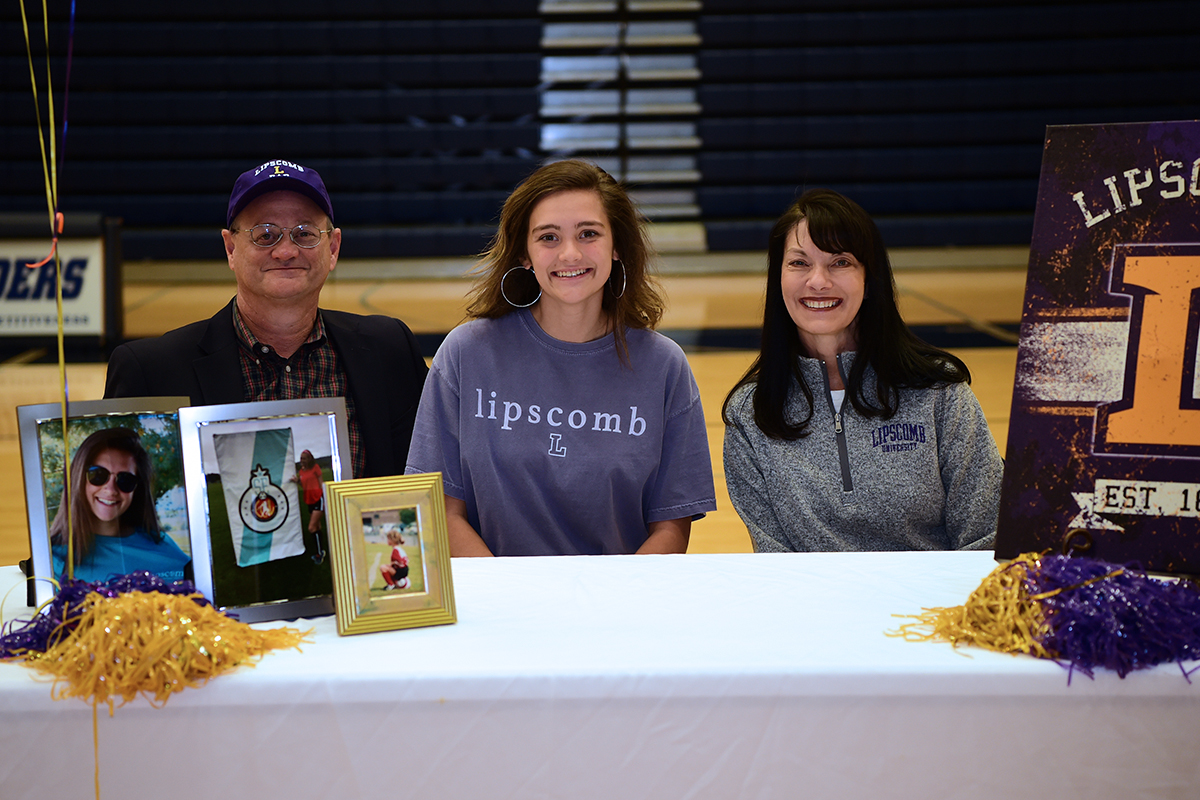 Katey Ann started attending Randolph in kindergarten which makes her a “lifer” who has been very active in Randolph athletics where she has contributed in Cross Country, Indoor Track, Outdoor Track and Soccer.  During most of these school seasons, she also participated in a demanding club soccer schedule.

A review of some of Katey Ann’s athletic accomplishments at Randolph include the following:

In track, she was ranked nationally in middle school and participated in the New Balance Nationals in New York City. She has a school record for the 800 meters in Indoor track and was part of the 4X200, 4X400, and 4X800 meter relay teams that received many state medals and currently hold the school record in each. She has been on the Randolph Soccer team for the past two years and each season was named Offensive Player of the Year. Katey Ann was an integral part of last year’s team that made it to the third round of the state playoffs. She had two goals in the first round 4-0 win versus Hazel Green to bring her season goals scored total to over thirty. This last year she was also chosen as one of 120 ladies in the United States to be named an All–State High School All American.

Katey Ann has had an extensive soccer career that started at the age of three. As a young child, she played on an all-boys team for many years. She went on to play with Huntsville Futbol Club where she played on D1 and Region 3 Teams. She was captain of several teams that won D1 State Championships. While at HFC, she was selected to participate in the Stoke City National Camp and went on to train at the Stoke City Development Academy in England.  Outside of Club, she was selected for and played for Team Adidas, Alabama Elite, the first team Alabama Olympic Development Program, and received one of the highest accomplishments in soccer as a Region 3 United States Youth Soccer Olympic Development Program Pool Player. She currently plays for Birmingham United’s Alabama Futbol Club which is part of the Elite Club National League. Her 2001 team played in the 2018 Championship in Seattle.

In addition to Katey Ann’s athletic accomplishments she has also volunteered for FCA since the 6th grade and she was inducted into the National Foreign Language Honors Society.

Katey Ann’s parents wanted me to make sure it was mentioned during the ceremony that throughout all these school and sports activities, Katey Ann has had an incredible support system in her many coaches, teachers and friends. Many thanks to each one of them for being an instrumental part of Katey Ann’s life.

Randolph School is proud to announce that Katey Ann will be attending Lipscomb University next year to play soccer for the two-time Atlantic Sun Conference Champions and NCAA tournament bid, Bison’s.

Former Randolph girl’s head soccer coach, Paul Tassone, spoke about his wonderful experience coaching Katey Ann the past two years and had many fantastic things to say about her commitment, dedication and leadership. Then Katey Anne thanked her friends, family, faculty and coaches. 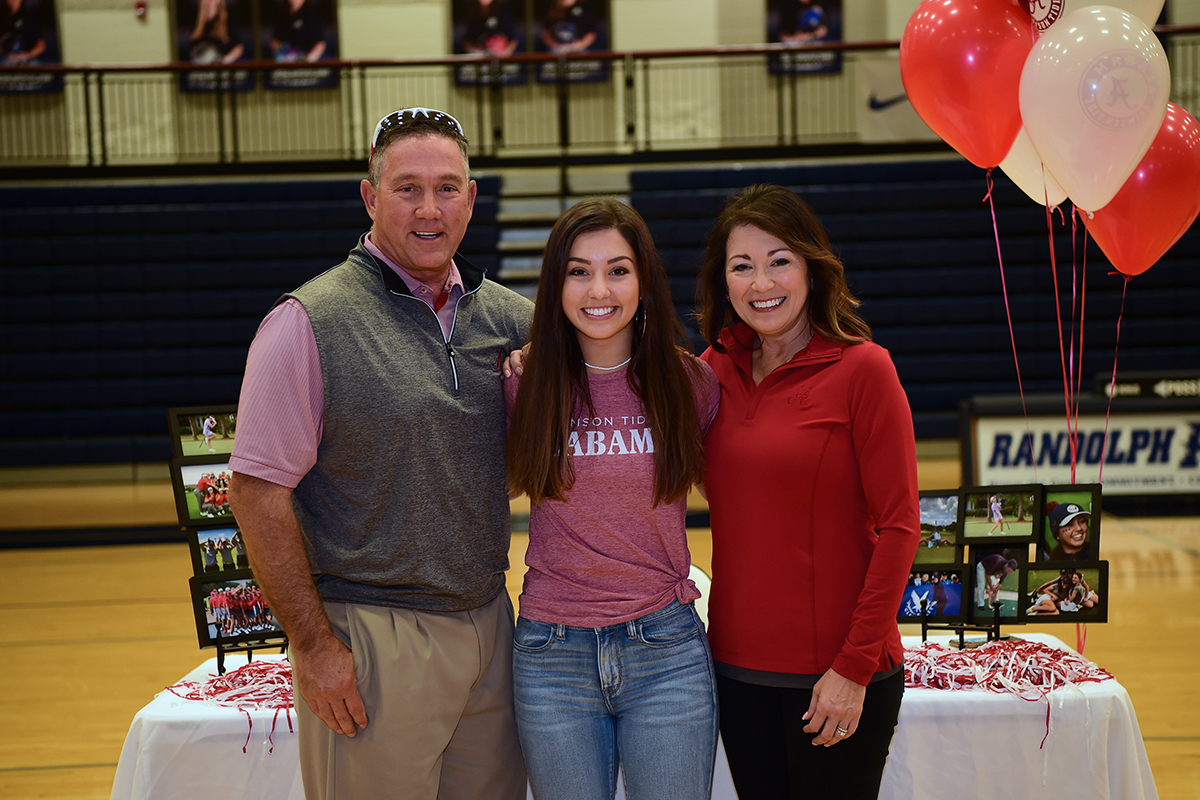 The next Randolph senior is golfer and former softball player, Michaela Morard.

Michaela started playing golf at the age of 2 ½ and began playing competitively at the age of six. She played in her first of six US Kids World Championships at the age of 7.  She also started playing softball at an early age playing out of Mayfair Park where she won numerous Huntsville City Team Titles and City All-Star Championships while playing the positions of pitcher and shortstop.  Her other interests include music, drawing and she has a great appreciation for art.

Michaela entered Randolph School in the fall of 2016 as a 9th grader after attending Huntsville Middle School and playing Golf for the 7A Huntsville High Panther Girls Team where she became the 1st 7th grader in AHSAA history to win an individual State Title in May of 2015 and then led the Panthers to their 1st ever State golf title and another individual title in May of 2016.  While she was ineligible to compete for Randolph during 9th grade due to AHSAA transfer rules, Michaela adjusted to her new academic environment while she continued to play Regional, National and International Junior Golf Tournaments with the full support of all her Randolph teachers and administrators.  At the end of her Freshman year in May of 2017, Michaela was awarded the Randolph School Lyle Alumni Award given to a rising Sophomore based on “enthusiasm, industriousness, pride in achievement, conscientiousness, and performance to the best of one’s ability.”

Finally, in her sophomore year, Michaela got to participate in Randolph Athletics.  She played both Softball and Golf, both spring sports, where she led the softball team in batting average, home runs, RBI and was named the team MVP in 2018.  On the Golf course she helped lead the Randolph Girls team to their first ever team trip to the State Championships where the Raiders finished in 2nd place and brought home the Red AHSAA Map Trophy and was named the team’s MVP and named The State High School Girl Golfer of the year. At the end of her sophomore year Michaela was awarded Randolph’s “Honor the Game” Award presented to the individual who, “commits to team before self, demonstrating strong character and developing a disciplined competitive spirit.”

In the 2018-2019 season, Michaela and the Randolph Girls Golf team had some unfinished business to take care off.  With the 2019 golf season slogan, “Walk Like a Champion,” Michaela helped lead the Randolph Girls Golf Team to its first ever Golf State Championship and she also won her 3rd Individual State Title and was once again named MVP of the Girls Golf Team while setting the AHSAA All-time record low season scoring average of 69.50  In the Summer of 2019 Michaela was named to the first ever AHSAA North Team in the annual AHSAA North vs. South competition where Michaela lead the AHSAA North All-Star team to a 58.5 vs. 55.5 victory  and she still has her senior year at Randolph to add to these accomplishments.

Randolph School is proud to announce that Michaela Morard will be attending the University of Alabama next year to play for the Crimson Tide Women’s Golf Team, one of the nation’s Top NCAA D1 Women’s Golf Programs.

Michaela’s father and Head Coach of Randolph Golf, Michael Morard, then spoke about his daughter and what she has meant to him as a daughter and team member. Then Michaela thanked her friends, family, faculty and coaches.

Randolph School congratulates these seniors, their families, friends and coaches. We are all very proud of them and anxiously await to see them continue to shine in college.