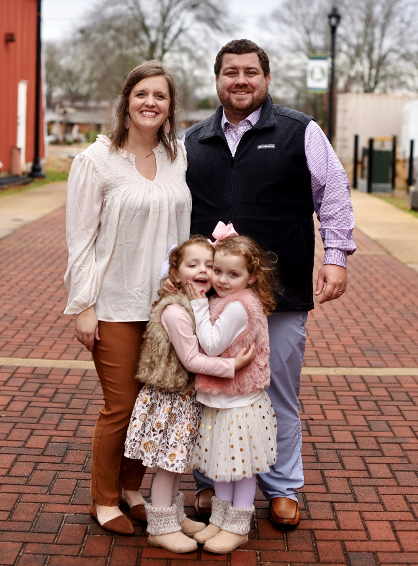 Director of Athletics Blake Davenport says, “When the head coach position recently became available, I was concerned that the time of year and the unknown of the pandemic would present major challenges for the search. After receiving a great number of resumes and having dialogue with over 40 candidates, it was clear families want to be part of the remarkable environment here at Randolph School.” Davenport continued, “David Lloyd was a candidate that I knew was going to be hard to beat from the first conversation we had. We developed a substantial profile for what we were looking for in our next leader of the football program and Coach Lloyd checked the boxes better than anyone.”

Coach Lloyd was quick to answer what he saw in Randolph that made him put in his resume, “Randolph School is well known for its high academic standards. I saw it ranked as the #1 K-12 private school in the state and I believe in holding students to high standards on and off the field. We will always set high expectations and we will never shy away from discussing it daily. As an educator, I want to challenge my students to be the very best that they can be in the classroom in addition to on the field and I can do that here.”

Coach Lloyd had the following to say about the Raider athletic programs, “It is clear to see that Randolph Athletics is committed to developing their student-athletes to be able to perform at the highest possible level in all sports. From the strength and conditioning program, the facilities, lower and middle school alignment, continuity in coaching, and leadership stability, Randolph is in a position to continue their athletic success.”

Lloyd comes to Randolph after a three-year stint at Huntsville’s St. John Paul II Catholic High School where he served as a History teacher and head football coach who inherited a program with the state’s longest losing streak (39). In his second year leading the program, he improved from an initial 1-9 record to an 8-2 Region runner-up season and first playoff appearance in school history largely due to an increase in points scored from 77 to 245. Year three resulted in the team making back-to-back playoff appearances and the first playoff win in school history.

When asked to describe his biggest on-field achievement in his 13 years as a head coach, Lloyd replied, “My first year as the head coach at JP2, we got beat 67-7 by Brooks High School. Two years later we earned our first-ever playoff win against Brooks on their field. A lot of our players played in both of those games. To see how hard our kids worked and to see how far they had come was one of the greatest moments of my professional career.”

In those three years, Coach Lloyd increased student-athlete participation from 26 to 44 players on his team. In 2018, he was selected as the AL.com Huntsville Area Coach of the Year, ASWA Class 4A Coach of the Year in 2018, and has developed five All-State Players.

Lloyd started his coaching career in 2007 at Central Holmes Christian School in Lexington, Mississippi where he was a History teacher, Director of Athletics, and Elementary Principal during his five years. In his first year, he led the team to their first playoff appearance in seven years and developed two All-State Players, two Region Players of the Year, and two All-Star Game participants. After getting married in 2012, he and his wife Anna both found teaching jobs that took them to Kestrel Heights School in Durham, North Carolina.

At Kestrel Heights, David served as a Physical Education teacher and department chair, Assistant Athletic Director, and Strength and Conditioning Coordinator. On the gridiron, Lloyd took a program that was previously 0-40 to three consecutive playoff appearances (only appearances in school history), finished as Region Champion in his third year as head coach, increased his roster from 21 to 52 players and was selected as the North Carolina 1A Coach of the Year in 2015. After the birth of his two twin daughters, Isabella and Violet (currently four years old), the couple looked to make a move closer to grandparents in north Alabama.

Coach Lloyd was asked how he defines success and said, “Our program will never measure success by wins and losses. We will never sacrifice our long-term integrity for short term success. Our work ethic, character, and our ability to overcome adversity will define our success. We will strive to be valuable members of our school and community.”

Davenport calls Lloyd a complete coach adding, “I was highly impressed with Coach Lloyd’s football background. Over his 13 years of coaching with 10 as head coach, he has served as a Defensive Coordinator and coached every position group on the field. His passion is directing the offense and he specializes in coaching the offensive line and quarterbacks. He also understands the value of developing the younger ages and looks forward to overseeing our NFL Flag Football program.”

Lloyd will teach Health and Human Performance classes in the Upper School at Randolph. He earned his BS in History, with a Minor in Kinesiology, from Mississippi College and is currently enrolled in graduate school at the University of West Florida.

Please join us in celebrating the selection of David Lloyd as Randolph’s head varsity football coach. Randolph Athletics will announce an official on-campus Meet and Greet when conditions allow. Meanwhile, Coach Lloyd will hold a Zoom meeting with the middle school and varsity football families, where he will discuss his vision for the program and his plans for the summer and fall season.