Your Randolph Raiders competed on Saturday, November 14 in the AHSAA 6A State Cross Country Championships at the Oakville Indian Mounds Park in Danville, AL.  This meet was a culmination of the season where both of our teams qualified last week at the AHSAA 6A Section 6 Championships at John Hunt Park in Huntsville.  This championship meet was a huge step up for the Raiders as they have gone from competing in the 1A-2A division in the early 2000’s to the second largest division in the AHSAA, not by acquiring extra student bodies within the school walls, but by all of the success the cross country program has had over the years.  The Raiders were up for the challenge and step up they did!  View photos.  More photos on Vidigami.  Big thanks to Guiliang Xing for shooting our Cross Country events. 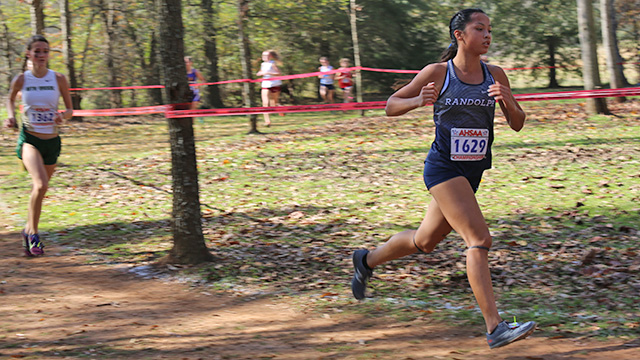 The girls were first of the two teams competing on this day, with a race start of 11:10 AM.  The girls 6A state championship race was the largest race of all 7 divisions of the day, with 24 teams and 227 finishers.  The girls went in ranked 7th out of 24 teams and after the dust settled, the girls accomplished that goal with a 7th place team finish.  Notable finishes; senior and Co-Captain Sophia White finished 14th and “All State” with 19:59.  Fellow senior and Co-Captain finished 24th and 20:29. Sophomore, Sarah Kate Mitchell finished 39th with 21:08, 7th grader Hope Falkenberg finished 53rd in 21:53, freshman Rachna Ghanta finished 65th in 21:54.  Sophomore Armita Amiri was 84th in 22:23, 8th grader Emma Towner Jones was 109th in 23:04, 7th grader Lucy Zhang was 114th in 23:19, freshman Parmida Amiri was 120th in 23:27, and sophomore Sydney Clary was 139th in 24:04.  Homewood is the 6A girls team state champion, Mountain Brook was the runner up, McGill Toolen was 3rd, Briarwood Christian was 4th, Northridge was 5th, Scottsboro was 6th, just ahead of your Lady Raiders. 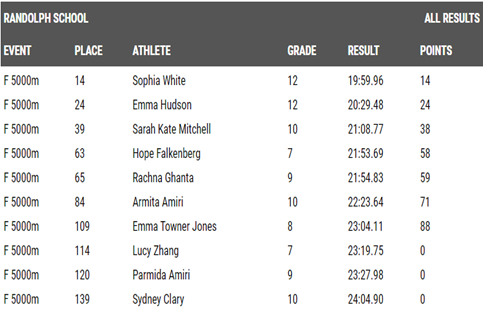 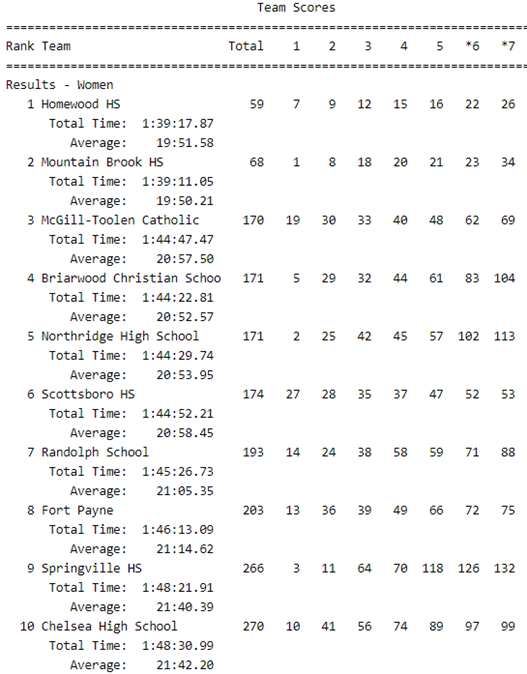 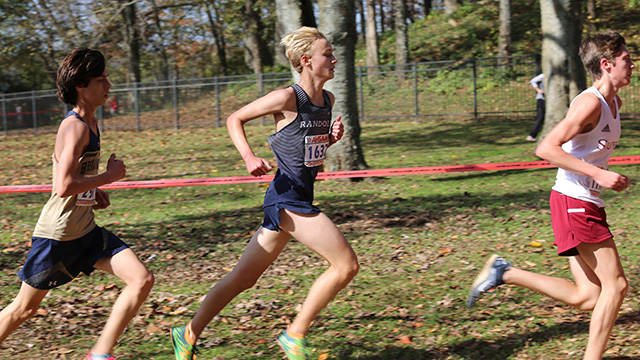 The boys 6A state championship race was the last race of the day.  The boys went into the state championships virtually ranked 10th as a team in the 6A division. The boys had a plan of going out strong, but as a team.  They moved up after the mile mark and finished very strong as a team.  The boys finished the day with a 6th place team finish, but that wasn’t the most impressive part.  There was only 22 seconds between the 1st runner to our 5th runner!  They really did run as a team!  This bodes well as none of the top scoring 5 are graduating and they will all be back in the fall of 2021.  Sophomore Jackie Howse was the first Raider to cross the finish line in 17:29.  Freshman Evan Shields was 40th in 17:34.  Junior Eric Xing finished in 48th in 17:42 and sophomore Zach Takacs was 52nd in 17:45.  Our final scorer was junior David Coomer in 17:51.  The 6th and first displacer was freshman Jamie Matthews in 18:56 with fellow freshman Nate Schamban in 134th in 19:09.  Co-captain, junior Felipe Marples Rodriguez was 155th in 19:28.  Freshman Thomas Raiford was 172nd in 19:55.  Lone senior, Adin Rossi was 180th in 20:08.  On the team championship front, Scottsboro won it’s 5th straight state team championship, Mountain Brook finished runner up.  Homewood was 3rd, Cullman was 4th, Briarwood Christian was 5th, and your Raiders took home 6th place overall as a team.  Interesting fact that 6 of the top 10 teams were not in 6A last year.  6A was by far the most competitive division for boys among all the 7 divisions. 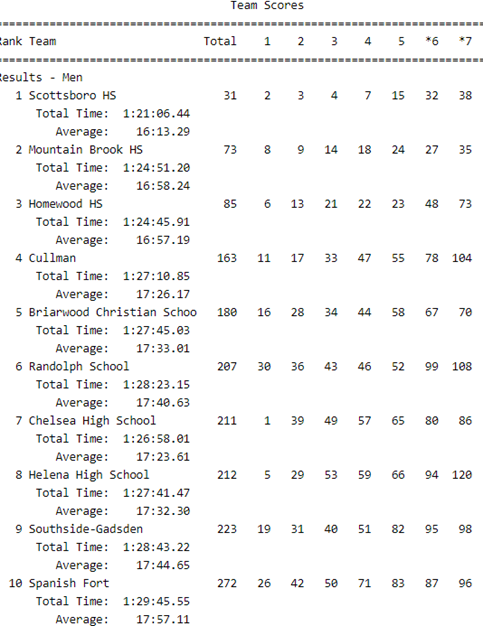 We are extremely proud of both of our teams.  We could not have asked for more of an amazing and talented group of kids to work with this year.  Even though this year ends our 15 year run of bringing home either a blue map or red map on either the girls or boys team, we must say that this year was one of the fun years because that added pressure of winning was not there. Yes, this year was definitely different in every aspect of our lives, but we feel so fortunate to have had this season to actually take place.  We accomplished so much more than what the results could ever show.  We want to thank all of the parents, Randolph faculty, administration, coaches, and our team members for everything they gave for this season to happen.  We feel so blessed and fortunate for all that was accomplished this fall!    Randolph Cross Country 2021 has officially begun!  Congrats Raiders! – Coach Twig