The Randolph School community celebrated the decisions of two Randolph senior student-athletes. The hard work, determination, and sacrifice away from these two seniors’ spotlight have led them to this day in the spotlight. They have earned the opportunity to further their education and athletic passion beyond high school, and the Randolph School community is honored to celebrate with these students, their families, friends, faculty, and coaches. 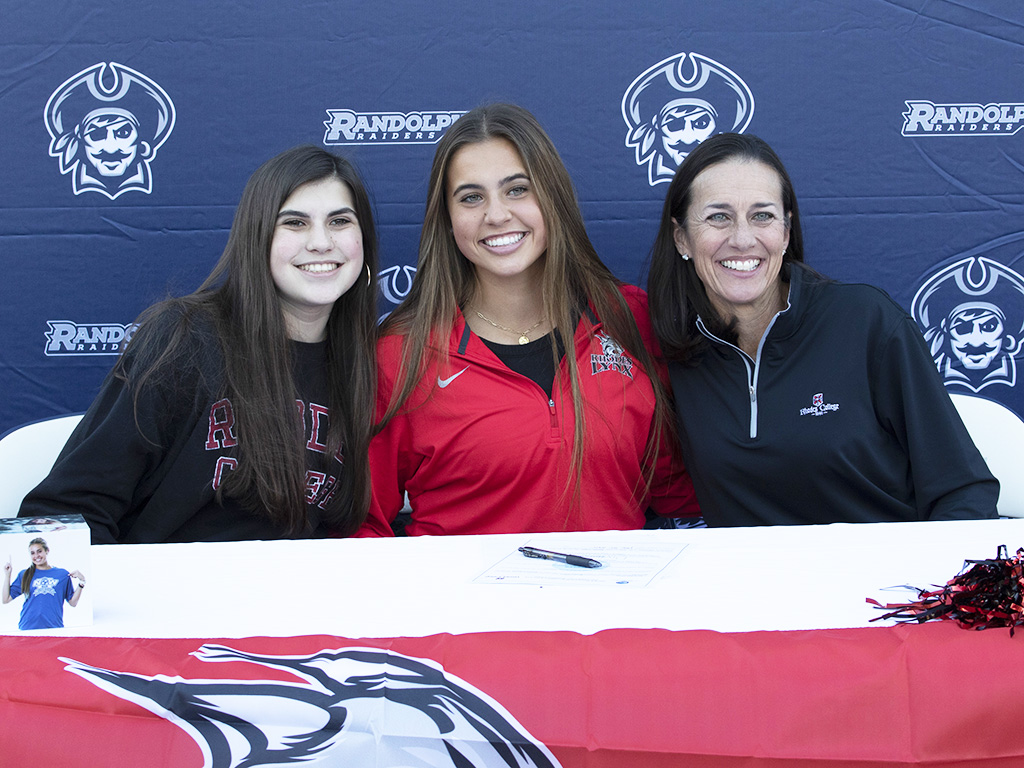 After years of taking dance and gymnastics classes, playing softball, and swimming, Sarah Kate announced that she wanted to play soccer out of nowhere in third grade. Not sure that Sarah Kate even knew anything about soccer, but willing to let her try it, her mom signed her up to play in a rec league and then with RAP soccer…and the rest is history! Sarah Kate loved soccer from day one, and she quickly dropped all other activities to focus on her new sport. Her passion for soccer, coupled with her drive and determination, has brought her to today.

It has not always been easy, and Sarah Kate has had to overcome many obstacles to pursue her dream of playing soccer at the collegiate level. A few of these included playing on early club teams that the moms nicknamed the “Bad News Bears,” to a serious foot surgery that took her out of the game for a year, to having limited options for her age group when the club teams split a few years ago. Yet through it all, she persevered and continued to grow as a player. Sarah Kate often said that she felt confident that God would not have put such a desire to play soccer in her heart if it wasn’t what she was supposed to be doing. So, she never gave up…instead she worked harder each year and fell more and more in love with the game.

Sarah Kate started her journey at Randolph in Kindergarten and has played on the Randolph Varsity team since seventh grade, except her freshman year when she was invited to play on the National Premier League team at IMG Academy. She was named to the 2020 All-Metro team as a junior and has received the Randolph Scholar-Athlete Award numerous times. She currently plays club soccer for the Vestavia Hills Soccer Club Attack 02 Black team competing in the Alabama Division I State League, Southeastern Clubs Champions League, and the Regional Premier League. For the last two years, she has traveled to Birmingham several times a week to train with her Vestavia teams, along with many weekends of travel for games. She has had many great opportunities with this club, including playing in the National Cup in 2019.

Sarah Kate is also a leader in this community. She has served as Vice President of her class for both her junior and senior years, as a Randolph School Student Ambassador for the last three years, and as the Randolph Varsity Girls Soccer Team Captain the previous two years. She is also the Head Soccer Coach for the Huntsville Inner City Learning Center’s summer program.

Sarah Kate had looked at many colleges and attended ID camps across the country over the last four years. Even though she had several fantastic offers and opportunities, she didn’t feel settled. But she knew she had found her home when she attended a camp with Coach Chambers and her team at Rhodes College in February. It was a great feeling to know she had found the perfect fit, both athletically and academically. Sarah Kate committed to play soccer this past summer and has since received the Cambridge Scholarship, which is the highest merit scholarship at Rhodes.

Randolph School is proud to announce that Sarah Kate Childs will be attending Rhodes College next year to play soccer for the Lynx in the Southern Athletic Association.

Randolph girl’s head soccer coach, Christy Copeland, spoke about the incredible character and leadership skills Sarah Kate showed during last year’s season that was cut short by the pandemic. Then, Sarah Kate thanked her friends, teachers, coaches, and family for all the support they have given her over the years.

The next Randolph senior also started at Randolph in Kindergarten, is a Soccer player, but also a Cross Country and Track athlete, Emma Hudson. 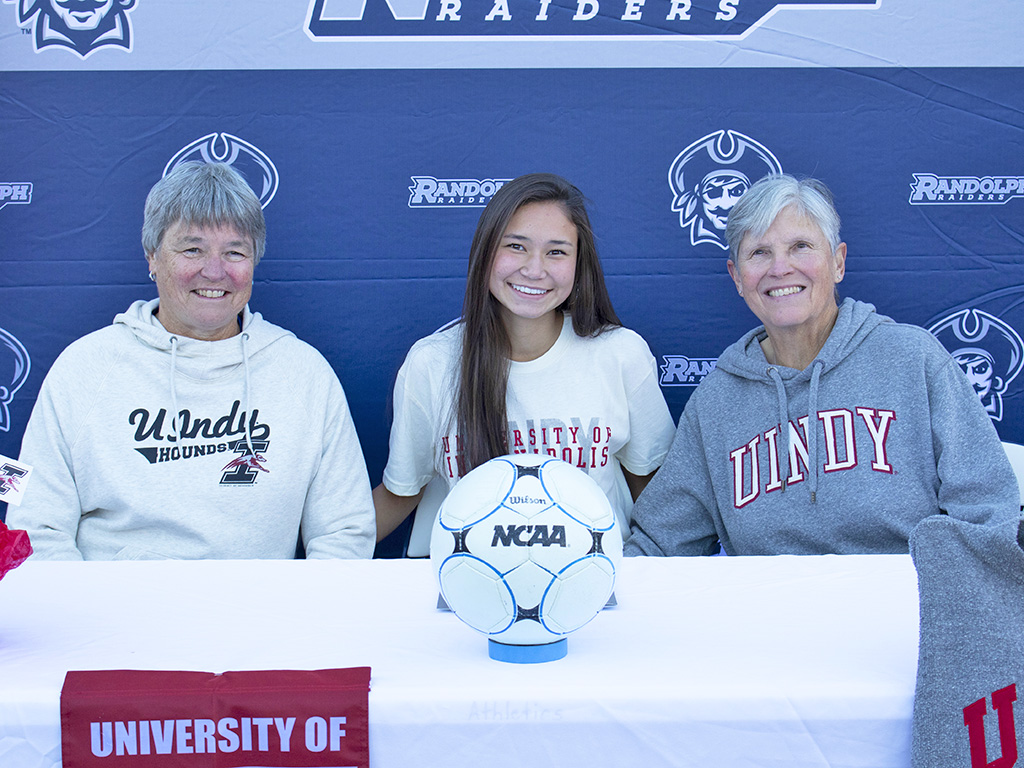 Emma started her athletic career when she began ice skating with her grandfather, Fred Hudson, at four. By the time Emma was five years old, she played hockey and was wearing a Junior Charger jersey. She had her own dressing room because she was the only girl in the program. Emma had a powerful skating stride that may have been a foreshadowing of her excellent running career.

Since seventh grade, Emma has been a member of the Raider Cross Country team. She was a member of two state championship and state runner-up Cross-Country teams. Additionally, she was selected as the MVP of the team on two different occasions. In Indoor Track, Emma holds the school record for the 3200.

In kindergarten, Emma was introduced to soccer through the Randolph RAP program. At the end of her third-grade year, Emma began playing for United Soccer Club in Huntsville and joined the Huntsville Futbol Club after two years. Her HFC team has been the Alabama state champion for five consecutive years. In eighth grade, Emma began playing varsity soccer at Randolph and has started and played in 95% of the games since then. She helped lead the team to the state playoffs in her sophomore year but could not play in her junior year due to a knee injury. Emma was awarded Randolph’s “Honor The Game” award during her sophomore year.

Emma is a scholar as well as an athlete. In her freshman year, she was awarded the prestigious Lyle Alumni Scholarship. She is a member of the National Spanish Honor Society and has made the Dean’s List.

Emma has been awarded an academic and athletic scholarship to the University of Indianapolis. She will be a member of their NCAA Division II soccer team in the fall of 2021. Initially, the interest in the University of Indianapolis was driven by the fact that Emma’s sister Fran (Class of 2018) attends Butler University, also located in Indianapolis. When Emma visited UINDY, she loved the “feel” of the beautiful suburban campus and the exceptional athletic facilities. Holly Cox, the women’s soccer coach, was very welcoming and enthusiastic about the program’s direction. Emma was impressed with her mindset and style of coaching. After follow-up conversations and emails with the coach, Emma decided to be a UINDY Greyhound!

Randolph School is proud to announce that Emma Hudson will be attending the University of Indianapolis next year to play soccer for the Greyhounds.

Randolph girl’s head soccer coach, Christy Copeland, spoke about the tremendous role Emma took during last year’s season even though she was injured and unable to play. Then, Emma thanked her friends, teachers, coaches, and family for all the support they have given her over the years.

Randolph School congratulates these seniors, their families, friends, and coaches. We are all very proud of them and anxiously await to see them continue to shine in college.