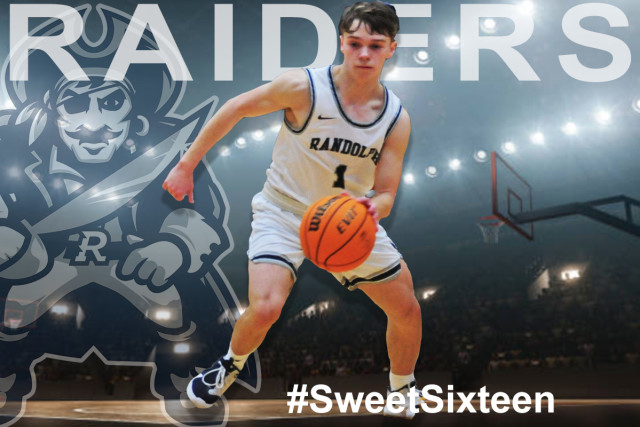 The Randolph Boys’ basketball program won their only Sub-Regional playoff game in school history back in 2011. In a game that came down to the last few seconds, the 2020-2021 team added to that win total last night in an intense victory on the road versus New Hope High School by a score of 60-58.

Head Coach Mike Morris had this to say after the game, “I am so proud of this team and the unselfishness, toughness, and grit they played with tonight. For these young men to advance to the Regionals/Sweet 16 is a testament to their commitment and work ethic. We had several players make big plays tonight: Curtis Cooper’s three in the corner, Andrew Hunter’s three on back-to-back possessions. The best was a total team effort by all five players to execute to perfection on the game-winning layup by Grayson Davenport with two seconds left. I’m happy for these young men and ready to play in the Sweet 16.”

Like so many games this season, the Raiders depend on strong defense, clutch free throws, and accurate shooting from beyond the arc. The Raiders’ battle versus the Indians wouldn’t be any different for any chance to win.

The game opened with Grayson Davenport sinking his first of four three-pointers on the night, Andrew Hunter’s first of five soon after, followed by another from Davenport and the score was 13-11 Randolph aided by a great charge taken by Curtis Cooper. The Indians knocked down a few threes of their own and the first quarter ended in their favor, 18-13.

More Davenport and Hunter three-pointers came in the second quarter to cut the New Hope lead to 22-21 with 4:00 left until half. It was a crafty steal by Sam Servick that he delivered for a layup that put the Raiders up 23-22, and the half ended Randolph 25, New Hope 23.

Four minutes into the third quarter, a Davenport three and Cooper bucket and converted free throw made it 35-32 Raiders. After a three by Hunter and one by New Hope, the Raiders hung onto the three-point lead. Carter Wimberly’s two made free throws after being fouled as he shot at the buzzer gave Randolph the 43-41 edge headed into the fourth quarter, where the excitement cranked up another notch.

After the Indians made two three-pointers, they led 47-45 with 5:33 left, but additional Hunter and Cooper threes tied it up 51-51 at 3:25 when Coach Morris called a timeout. Hunter made one of the Raiders’ many great defensive plays when he deflected a pass on New Hope’s end of the court and then cashed it end for his fifth three of the night. The game of many lead changes favored the Raiders, 54-51, with 2:30 left in the game.

Wimberly was fouled and hit both critical ends of a “one and one” free throw opportunity, and the Raiders led 58-53 with 1:00 remaining, but the Indians tied it up 58-58 with :27.6 on the clock. Timeout Raiders!

Twenty-nine years of coaching experience to include NCAA tournament games is nice to have on your sideline in times like these. While many coaches may have drawn up a special play or focused on one player to take the game-winning shot, Coach Morris decided to go with the program’s bread and butter play. Starting with Servick running the point, it was 25 seconds later when Hunter made the ninth pass to Davenport that resulted in the winning layup with :02.4 left on the clock. Raiders 60, New Hope 58. The Indians last-second half-court shot bounced off the rim, resulting in the Randolph Raiders heading to the Sweet 16 for the second time in school history.

Final stats on the night include scoring leaders: Davenport (17), Hunter (16), Cooper (14), and Wimberly (11 including 5 of 6 free throws all in the second half), and some incredible defense highlighted by steals, charges, and blocks throughout the night.

The “Sweet 16” playoff game will be played tonight at Anniston High School, where the Bulldogs are ranked #2 in the state. The start time is 7:30. A limited number of tickets can be purchased on the GoFan.co website and app starting at 4:00 this afternoon while they last.

Double Header
11:00 am
View All Events