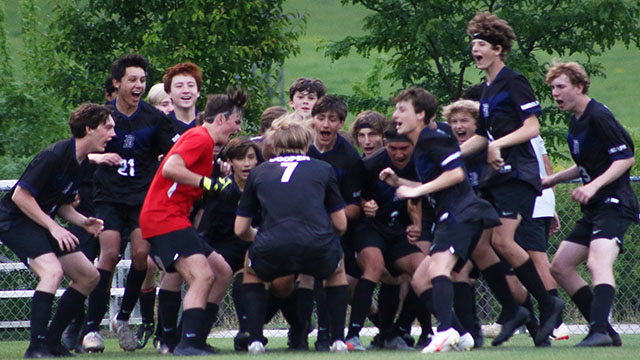 The Raiders faced the Hartselle Tigers in a second-round matchup in the AHSAA 6A Playoffs. The Tigers have a potent offense that has the leading scorer in America with 57 goals. It was going to be tough task to shut the Hartselle attack down.

The defense was ready for the challenge and made it very difficult for the Tigers to find any good chances. Senior Curtis Cooper and Junior Anders Hughes locked down the back with Junior midfielder Sam Servick protecting the middle.

The Raider offense picked up where they left off in round one and moved the ball well and controlled the tempo of the game. They were getting close but just couldn’t find the back of the net. In the 15th min substitute, Sophomore Keegan Morse came on to the pitch and his first touch of the game was a though ball from Anders. Keegan second touch was a rocket shot past the keeper giving Randolph the 1-0 lead.

Five minutes later Keegan was at it again. This time, eighth grader, Tyler DeOrio played a ball behind the defense and in to space. Keegan again ran it down and put it past the out-stretched hands of the keeper and doubling the lead for the Raiders.

Hartselle was a good team and didn’t quit. They had a strong midfield and a great goal scorer up top. In the 30th minute the Tigers finally found some space wide and played a good ball across where they were able to finish and cut the lead in half.

Randolph didn’t look phased and bounced back just before halftime. Anders took a free kick from just inside the midfield mark. He played it over the defense, and it caused the goalie to slip and not be able to recover to get to the ball as it bounced in the net. The goal gave the Raider the two-goal cushion again and the 3-1 lead at the half.

The Raiders started the second half strong and continued the control the possession. It didn’t take long for Randolph to strike again. Anders took a throw-in and played it long down the sideline to Junior Ethan Kubista. Ethan beat one defender and put it near post and the goalie didn’t have a chance.

The lead was 4-1 but the Tigers didn’t quit. The game was physical and fast. Junior keeper Cole Queeny came up with a couple of saves down the stretch to preserve the win.

The Raiders advance to the third round of the AHSAA 6A playoffs. They will play at Fort Payne High School this Saturday 7:00PM for a chance to advance to the Final Four. #OneTeamOneGoal. View videos of the goals under Video Highlights.