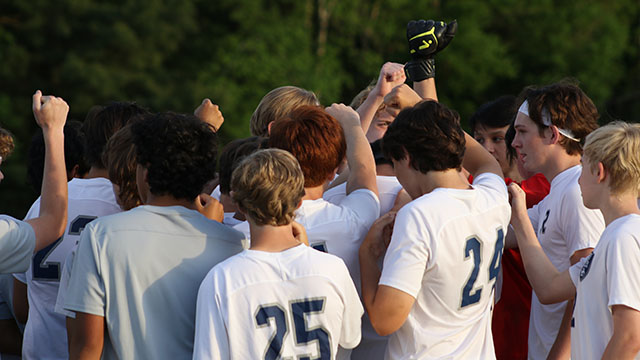 The Randolph Varsity Boys’ Soccer team played in the third round of the AHSAA 6A playoffs Saturday night. They traveled to Fort Payne to take on the 3rd ranked Wildcats for a chance to go to the Final Four.

These teams are very familiar with each other as they are in the same Area. Fort Payne won the area, but the Raiders were looking to come in and surprise them. It was a great game, high paced and physical. The Raiders were standing toe to toe with one of the best teams.

Early in the first half Randolph found its first opportunity and almost took the lead. Junior Ethan Kubista forced a mistake in the back and was able to steal the ball away and put a shot just wide. The Raider continued to work to find another look. Later in the half Junior Anders Hughes played a free kick in to the box. He found sophomore Chris Krajna who played it across the front of the goal. Junior Owen Phillips made a great run in to the box and put it just over the top of the bar. It was an excellent chance for the Raiders. The teams went to half scoreless.

The second half was more of the same. Fort Payne seemed to control the ball a bit more, but it was Randolph who was able to create more chances. Senior Cooper Wyatt and Sophomore Keegan Morse both had good shots in the second half. The team just couldn’t find the net.

The defense continued to play well. Senior Curtis Cooper with Anders and Sophomores Hunter Hess and Brennen O’Hare were at their best and never gave the Wildcats a good look at the net. It looked like the game was headed to overtime. With just over 10 minutes to go in the game the defense went up to head the ball out and collided with a Fort Payne player. The referee called it a foul and gave the Wildcats a PK. They converted their PK and took the 1-0 lead. The Raiders continued to push but couldn’t find the equalizer before the final whistle.

The Raiders lost 1-0 but played an outstanding game. The team knows they can play with anyone in the state. This young team with only 2 Seniors really came together at the right time and gave them a chance to get to the final four. The team is already excited about next year and believe they can play even better going forward.

Congratulations to Curtis Cooper and Cooper Wyatt on outstanding careers at Randolph We wish you good luck next year.