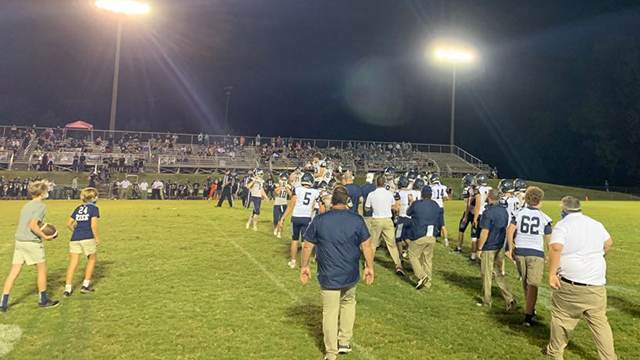 The Raiders earned a hard-fought victory against St. John Paul II last night. The Raiders trailed 7-3 after the first quarter. In the second quarter, the Raiders took a 12-7 lead after a touchdown pass from Andrew Hunter to Drew Stanley. Harrison Weathington also made his second field goal of the night. A stingy Raider defense led the way by allowing only 194 yards all night.

Holding on to an 18-13 lead with 1:25 left to play in the game, Drew Stanley intercepts a St. John Paul II pass to help seal the victory for the Raiders. Drew Stanley also had a receiving touchdown and David Clary added a rushing score.

“Our defense played another great game tonight. Offensively, we made plays when we needed to and at times, we looked great. We need to be more consistent on the offensive side of the ball. Defensively, we have played great so far this year and tonight was another example of the toughness of our defense.” – Coach Lloyd

The Raiders move to 3-0 on the year and 1-0 in Region play. The Raiders travel to New Hope High School next Friday, September 11 in their second region game of the year.